“Italia! O Italia! thou who hast the fatal gift of beauty.”

The Gulf of La Spezia is called the Gulf of Poets and it’s easy to understand the attraction the area has had for writers, painters and artists, including Percy and Mary Shelley, Lord Byron, D. H Lawrence, George Sands, Henry Miller and Virginia Woolf.

Lord Byron wrote the words above having in mind the beauty of the coastline stretching from Lerici to Porto Venere.

For beachcombers, the gulf is well worth a long stay, with peak season being from  June to August, for people primarily interested in looking at places of historic and artistic interest, La Spezia and its environment make a good two- or three-day stop, perhaps to break up a trip from the south of France to Florence or Rome, or vice versa. The major coastal trains stop at La Spezia, whose center is only 10 minutes from the A-12 Autostrada. Good roads lead to the towns and villages in the area, and the bus service is excellent. 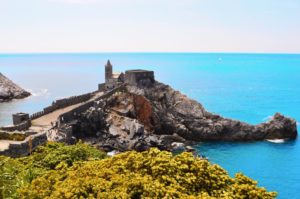 Nine miles from La Spezia, the village of Portovenere dominates its own tiny inlet. The Romans recognized the site’s strategic possibilities and fortified the area 20 centuries ago. Portovenere today looks fundamentally as it did in the 12th century, when was built a defensive outpost. Its general appearance and immediate surroundings have been less disrupted by postwar development than the residential areas on the other side of the gulf. The church of San Pietro, at the tip of a broad, sun-whitened promontory jutting into the sea, is Portovenere’s most impressive monument. It was built on the ruins of a pagan temple, and each of its parts dates from a different period. The northernmost end, constructed of black marble from Palmaria, is 1,400 years old. Stone steps lead down from the promontory to a peaceful cove where Byron, liked to swim and where he wrote some of his poems. Nearby stands the fine Romanesque church of San Lorenzo. 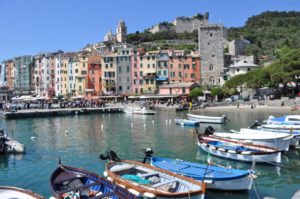 From a rocky outcrop above the church, a grandiose castle overlooks much of the gulf.

While most of the gulf villages virtually shut down at the end of September, Portovenere’s season extends through October and its narrow coloured streets are part of its beauty

A hilltop castle dominates the town of Lerici, seven miles from La Spezia on the eastern side of the gulf. This grandiose specimen of medieval military architecture is surrounded by massive walls that enclose several courtyards, a pentagonal tower and a Gothic chapel. Standing on the parapets, you can admire the town below, including the weather-worn, venerable belltower of San Rocco and the impressive baroque parish church, San Francesco. Much of the gulf, too, is visible – especially nearby San Terenzo, where the Shelleys lived. On the quiet quay directly beneath the castle, the Golfo dei Poeti restaurant serves superb spaghetti in a sauce made with bits of shrimp, garlic, parsley and oil.

The outskirts of Tellaro, a fishing village three miles further down the coast, are rapidly being built up, but the ancient center occupies an entire clifftop, thus cannot be expanded. Tellaro’s narrow streets, like Portovenere’s, are connected by minuscule passageways, called “caruggi” in local dialect, and steep steps.

One of the local specialties is zuppa di datteri, a soup made of date-shaped mussels from Portovenere’s bay. These creatures (lithodomus dactilus, for the scientifically curious) are lightly fried in olive oil with parsley, garlic, tomato and white wine, and served with toast. Less exotic, less expensive, but prepared in a similar way  is the zuppa di pesce, consisting of various shallow-water fish.

Scabeccio is made of fried mullet preserved in vinegar and fried with sage and rosemary. Trenette a stuffo is pasta with bean sauce; zuppa di ceci e bietole is a soup made of chickpeas and beet-greens, seasoned with fried parsley, garlic, celery, onion and tomato sauce; and of course there is the typically Ligurian pesto, made of basil, pine nuts, garlic and olive oil and served as a pasta sauce.

Your trip, though, may not be complete without a visit of “5 terre”

Continue your trip in the 5 terre