Milan is my hometown.  One of its best kept secret  is the unique experience you can have in meeting one of the greatest artist who lived here: Leonardo da Vinci

You cannot come to Milan and not see all the works Leonardo left here. He lived here from 1482 until the French invaded the city in 1499  and living here was not by chance. He arrived to the city from Florence to work for Ludovico, the despotic Regent, later Duke of Milan. Leonardo no doubt tailored his achievements to appeal to the militaristic Ludovico, but  left in town some of the most beautiful piece of arts you will ever see.

What you see on the wall of what was once a monks’ refectory is really a ghost of the painting that took the 15th-century art world by storm. Unwilling to work with the inflexible but proven technique of fresco painting, Leonardo painted directly onto the dry plaster. The paint went mouldy and began to deteriorate after only a decade or two.

Thankfully, years of careful restoration have removed later overpainting and stabilised the rest, and the essential drama of Leonardo’s attempt to capture the reaction of the disciples to Christ’s announcement that one of them will betray him survives. It was this, combined with the careful rhythm of composition, which groups the disciples into threes, leaving Christ isolated in the centre, and the subtlety of the perspective, which continues the lines of the refectory wall, that so impressed his contemporaries. 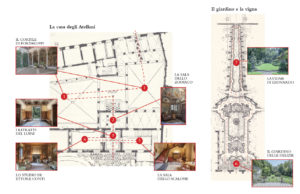 Leonardo da Vinci’s vineyard was in the middle of the fields at the bottom of Casa degli Atellani’s current garden, in what was then the great vineyard of San Vittore. The Atellani were a family of Sforza courtiers to whom Ludovico, years before, had given two houses. Ludovico had a double dream for this corner of the city: to make the Basilica of Santa Maria delle Grazie the Sforza family mausoleum and to build a residential neighbourhood where he could establish his most loyal followers, including the Atellani family and Leonardo. Casa degli Atellani is one of the few traces left of this Renaissance dream.

With the help of two important institutions, the University of Agricultural Sciences in Milan and Confagricoltura, the Portaluppi Foundation and the owners of the house decided to replant Leonardo da Vinci’s vineyard and open Casa degli Atellani and garden to the public on the occasion of Expo 2015.

Restored in the 1920’s by architect, Piero Portaluppi, Casa degli Atellani transports visitors into the Milanese Renaissance, with architectural elements that date to as early as the 1400’s.

Casa degli Atellani has hosted an array of prominent and eclectic Renaissance artists, personalities and figures.

Most noteworthy among its visitors was  Leonardo Da Vinci, who stayed there while painting the “Last Supper.”

Apart from being arguably one of Milan’s most beautiful privately owned palazzo’s, it was also one of the suggestive backdrops of the 2009 film “I am love” staring Tilda Swindon.

If you are looking for a very unique place to stay during your visit in Milan you have found it!

This breathtaking setting is matched by a central and strategic location in the Porta Magenta neighborhood of Milan, which offers an array of shopping and fine dining, and numerous historical sites spanning the Roman era to Renaissance,  Art Nouveau to Rationalism. 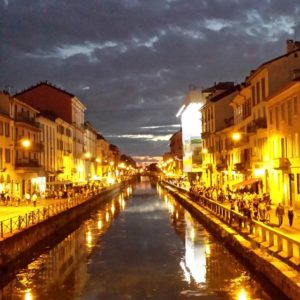 If Leonardo hypothetically could see the Navigli today, he would surely be much surprised but probably he would just join in the “Milanesi” for a drink sitting by the canals, maybe already drawing a mental plan to improve the functionality and outlook of this entertainment district. Understanding the movement of water and the rules of hydraulic was in fact, one of Leonardo’s great passions, as confirmed by the wealth of original drawings on the subject.

In 1100s Milan had already developed a circular moat system used for irrigation purposes and to operate hydraulic wheels to mill the wheat, cut woods etc. When Leonardo arrived in the city he started working on ways to improve this canal system which was becoming increasingly pivotal for the economic development of Milan. Despite the fact that Leonardo was not personally involved with the construction of the Navigli, he left many sketches and notes about his ideas which were adopted later by other engineers who worked on the canal system.

Atlantic Codex, the largest codex which is kept in Milan in the Veneranda Biblioteca Ambrosiana. And it is to his genius that we owe the mitre gates for canal locks known as da Vinci gates which he drew for the Martesana which finally entered Milan in the final years of the 16th century and fulfilled the dream of the Sforzas to join the waters of the Adda with the Ticino. Da Vinci gates are still in use on canals all over the world.

In the 19th century the canals started to be covered and replaced with roads as the invention of combustion engine made transport on rail and roads more attractive. Today only three canals have survived. The Naviglio Grande e Naviglio Pavese are the centre of the city’s nightlife especially during the warmest months of the year when the “Milanesi” enjoy sitting along the canal and sipping a glass of wine. The Naviglio Martesana is used instead by weekend cyclists who can follow the canal all the way to the river Adda about 30 km away.

Milan was once Italy’s fourth largest port after Genoa, Venice and Naples.

Near the Ippodromo (racecourse) you can admire the gigantic “Leonardo’s Horse”, which was built using Leonardo’s sketches. 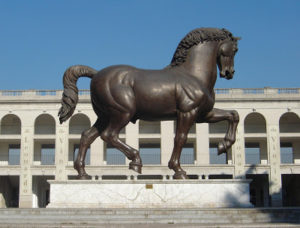 During his stay in Milan, Leonardo planned an enormous bronze statue of Francesco Sforza, Milan’s ruler in those years, riding a horse. He created a model of the horse, but the war came and he had to abandon the project.

During the Seventies Charles Dent, a former US air pilot, made a foundation to build the horse using Leonardo’s sketches. He too could not see the horse completed, because he died in 1994. Only five years later, in 1999, the majestic horse was terminated and donated to the city of Milan. The horse is the distinctive sign of the Ippodromo of Milan.

Contact manuela@theglobetailor.com to personalize your vacation or daytrip to Milan

Do you want to discover more about Milan?