There are places in Milan which really are hidden pearls. This tour is a perfect way to see the beauty of the Liberty architecture which can be seen in town.

The station hasn’t a defined architectural style, but it is a mixture of different styles, particularly Liberty and Art Deco united to the grandiosity of the fascist architecture. The great public surroundings of the station (the head gallery, the central Box-office and the Gallery of the Carriages) recall the Roman monumental architectures; in spite of the apparent monumentality inexpensive materials have been used: the superior parts of the walls are in decorative cement that imitates the covering marble  of the inferior parts, the great vaults  are not structural, but suspended and the decorative elements are in chalk (friezes of the box-office, panels with  zodiac signs) or cement (statues, lions figures). The roofing, that covers its 24 platforms, is composed of 5 vaults  in iron and glass and long 341 meters, it is work of the engineer Alberto Fava. At the platform 21 there is the  “Royal Room”, waiting- room of the Savoia Family and of the court, divided  in royal room and armory. 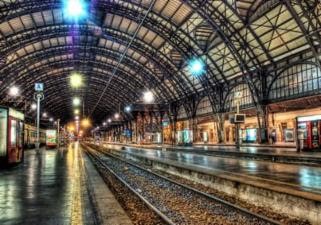 The Tour continues with a visit of the Hotel Diana, a beautiful place which was originally one of the first public swimming pool of Milan. The pool was then transformed into an ice rink, before taking its current form as an Hotel. It will be followed by a walk along the Malpighi street, where you’ll be able to enjoy the beauty of the Galimberti’s House, a unique example of Art Nouveau in Milan. In front of it, stands the house Guazzoni, recognizable among all others thanks to the gargoyles and cherubs on its facade as well as its magnificent frescoes restored in 1997. You will continue to walk along the beautiful street of Malpighi until the Library Melzo.

The Palazzo Castiglioni was built by the famous architect Giuseppe Sommaruga between 1901 and 1903. When it opened in 1903, its intent was to show the wealth of one of the most fashionable streets in Milan. The facade is  magnificent thanks to the statues of Ernesto Bazzaro and the interior of the palace is highly decorated with wrought iron and realistic art (verismo) statutes which have been deeply influenced by the Art Nouveau style.

Arrive  in via Cappuccini from there you will follow the Serbelloni street that will lead you in front of the Berri Meregalli House. Then there visit the Tensi House as well as the Invernizzi Villa where you will admire some exotic pink flamingos in the garden.

Then go back to Via Nursery. 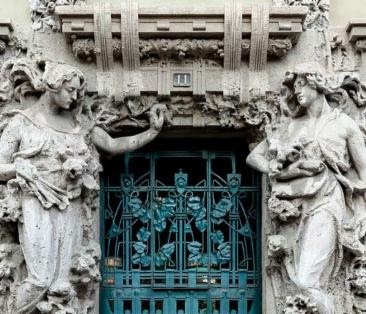 Casa Campanini is an Art Nouveau building in Milan, located in Vincenzo Bellini street. The palace was built between 1904 and 1906 by the architect Alfredo Campanini and it is one of the best examples of Milanese Liberty. When you enter into the building you can see a multitude of stained glass, frescoes and typical works of the Art Nouveau style. Here the original furniture in ceramics and the wrought iron chandelier are preserved. Noteworthy is the ceiling of the porch, where the floral theme of liberty is interpreted by drawings of bouquets and red cherries. 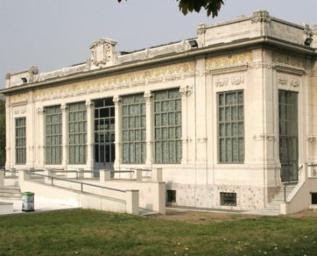 The Palazzina Liberty in Milan is an Art Nouveau building located in the Vittorio Formentano Park. It was designed in 1908 by the architect Alberto Migliorini, and it is characterized by slab ceiling windows, art nouveau designed facades, and interior decorations are in classic style.

The Casa Frisia was built in the early XXth century. This four floors building, is an interesting example of Milanese Liberty, especially regarding the facade with floral decoration, the entrance hall, and the stairwell. The lower part of the building has massive horizontal bands in big gray concrete bricks.

The last step of the tour will take place in the Via Pisacane which is one of the most beautiful street of Milan, full of magnificent Villas. You will have the opportunity to walk next to the Casa Campanini, the Casa Balzarini, as well as the Casa Cambiaghi.

After this beautiful touristic tour through the streets and treasuries of Milan, you will be back at the Stazione Centrale of Milan.

This is only one of the many itineraries in Milan. Feel free to contact me at manuela@theglobetailor.com  and I will tailor a perfect day in Milan for you.